I have previously described a set of 65 U.S. law firms with 200 to 300 lawyers.   Click here to read the full list of firms and understand the background: http://wp.me/p4JQV6-2aB

My hypothesis was that smaller firms would predominate, simply because they have fewer lawyers who might choose to start and sustain a blog. To test this hypothesis, I combined data my blog data set with numbers of lawyers at each firm in 2013, from ALM’s NLJ350 data set. The plot sorts the firms from the smallest at the lower left to the largest at the upper right.

From this data set and inspection of the plot, the hypothesis is false. As the plot below shows, the non-blogging firms range very evenly across the spectrum of number of lawyers in the firm. They do not cluster at the lower left side which is occupied by the relatively smaller firms (those in the 180-to-240 lawyer range). 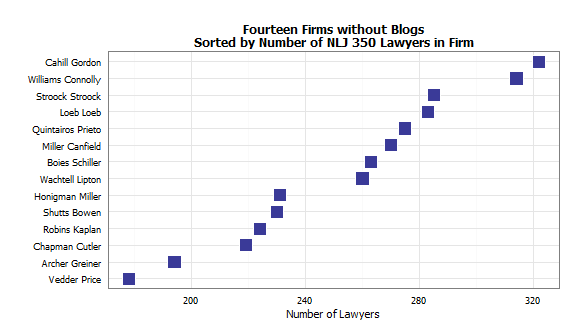