As explained before, a choropleth map colors geographic regions according to some variable. The choropleth map below shows the United States and the regions are some of its states. Those states are colored on a gradient by a variable: the number of graduates from highly-ranked law schools in the state who serve as the general counsel of a Fortune 500 company. 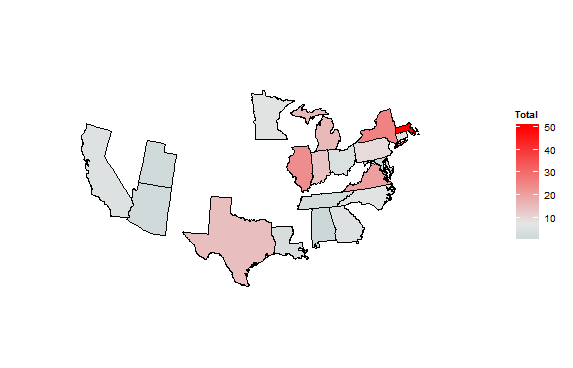 Many states are missing because they have no law school in them that has a US News & World Report ranking better than 50 (the best-ranked school has a 1 ranking). I took that subset of the full 150 law firms that have rankings simply to make the creation of this plot easier.

The gradient color code ranges from very light blue for those states with the fewest graduates from its law schools (Alabama had one, for example) up to bright red for Massachusetts, which mostly because of Harvard Law School can boast the most Fortune 500 general counsel who graduated from its law schools (50).